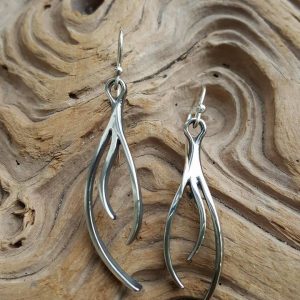 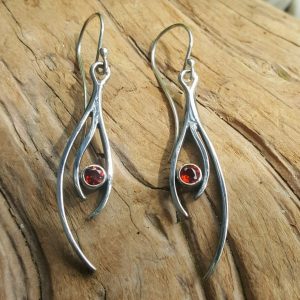 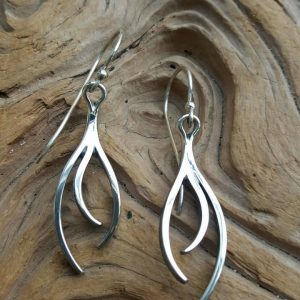 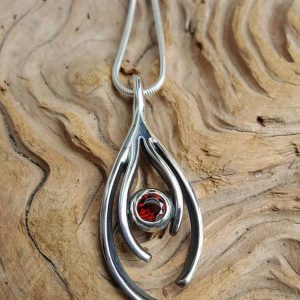 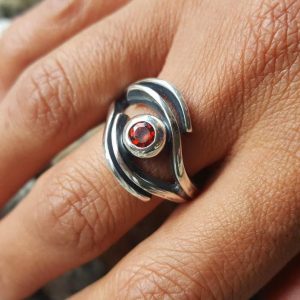 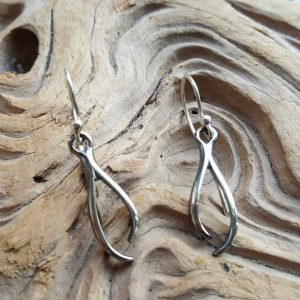 The popular Stag jewellery range actually came from a happy accident. Rob was working on his Echo ring, and holding two of the rings together when he realized there was yet another completely different ring to be made! He made the new ring, then added a glowing garnet at its centre. He then moved on to make matching pendants and earrings, all with the characteristic sinuous lines, evocative of antlers… hence the name Stag.

To really make the designs sing out, Rob has oxidised the low spots. This is done by painting oxidising fluid, which artificially ages the silver’s surface. The fluid most commonly employed used to be liver of sulphur, but the smell in the workshop made Rob fearful customers might think he’d stepped on a duck, so he switched to a Swedish product, Platinol, and thankfully the finish is superior and the colour is richer. Rob then gently polishes the surface to a high shine.

Originally, the designs were only set with garnets, but one day a customer requested the large pendant be set with a topaz… and after a simple change of stone, the pieces are transformed into something much lighter and airier, almost denoting summer and winter. Rob occasionally makes the drop earrings with beautiful freshwater pearls instead of stones – choosing iridescent pink or silvery grey ones.

There are a variety of pieces, from pendants to drop earrings to ear studs. The largest pendant is a dramatic, striking piece, it can be worn close to the neck, or is large enough to wear on a longer chain. There is also a more delicate pendant, for a more understated but still eyecatching look. The only piece Rob still has to design for the range is a bracelet or bangle, and ideas for that are still swirling in his mind!