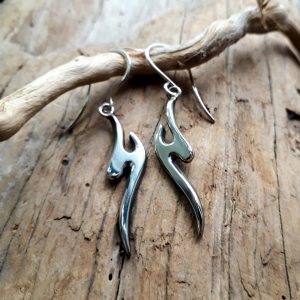 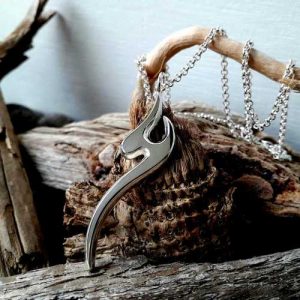 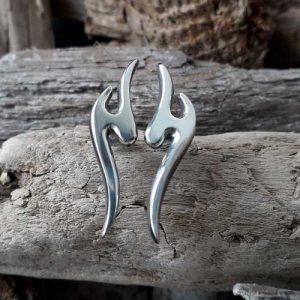 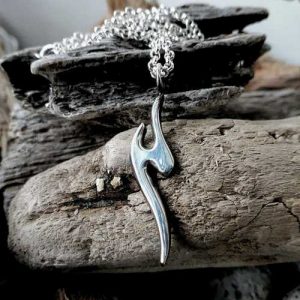 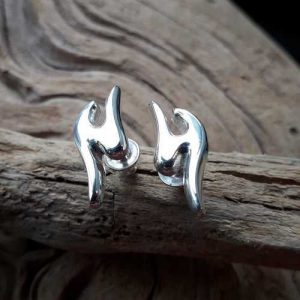 Rob Morris designed this range in the winter, inspired by open fires and coal burners and the movement of dancing flames. It was the sister range to Iced, its polar (!) opposite – Iced is angular and spiky, Pyro is sinuous and curvaceous, and the name comes from the Greek for fire. Rob worked on creating the shape of a single flame in a simple silver form but keeping it chunky and sculptural. Having lived near the Henry Moore Foundation in Hertfordshire, and later near Barbara Hepworth’s home town of St. Ives, Rob gained an appreciation of space at the centre of work, and how it can be used to intrigue the viewer. Because of the thickness of the form, Rob carved Pyro in wax rather than making it straight to silver. Once the wax was finished, then the work on the silver version started… filing the silver form back to a smooth finish, then intensively hand-polishing to create a mirror-like surface.

To really make the designs sing out, Rob has oxidised the low spots. This is done by painting oxidising fluid, which artificially ages the silver’s surface. The fluid most commonly employed used to be liver of sulphur, but the smell in the workshop made Rob fearful customers might think he’d ‘stepped on a duck’, so he switched to a Swedish product, Platinol, and thankfully the finish is superior and the colour is richer. Rob then gently polishes the surface back again to a high shine.

All the pieces in the Pyro jewellery range are chunky and solid, with their dark, oxidized sides and a flawless finish on the top surface. The pendant is available with a plain silver or oxidized chain, and Rob is very keen on the darker chain as he feels it really lets the silver flame shine.