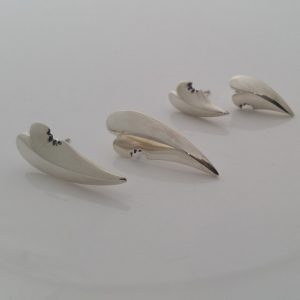 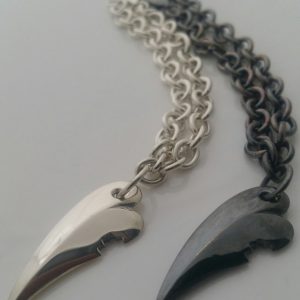 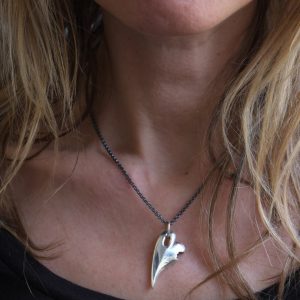 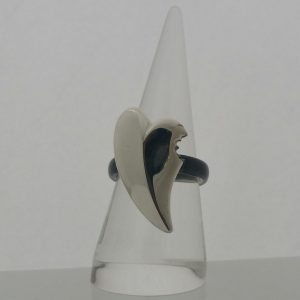 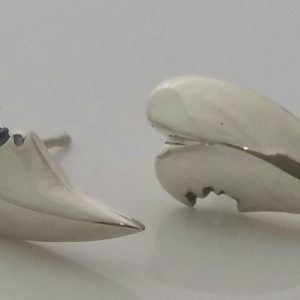 It was coming round to Valentine’s again, a time when many jewellers feel the need to make hearts. Rob Morris wanted to create something that wasn’t all slushy, but had a bit more oomph… a bit more edge… so the heart has a bite out of it (because we all know – love bites!). The shape is almost dagger-like, with a central spine, so the light reflection is changed by having two surfaces. These are particularly sculptural pieces, and the ear studs are Rob’s favourite.

To make some pieces in the Dark Hearts jewellery range more dramatic, Rob has oxidised some of them. This is done by painting oxidising fluid, which artificially ages the silver’s surface. The fluid most commonly employed used to be liver of sulphur, but the smell in the workshop made Rob fearful customers might think he’d ‘stepped on a duck’, so he switched to a Swedish product, Platinol, and thankfully the finish is superior and the colour is richer. You can choose to have the pendant on an oxidised chain to provide a contrast to the shiny silver. There is a Dark Hearts bracelet completely oxidised, as well as ear studs, so they are entirely black. As they’re worn, the oxidisation will rub back, allowing the silver to gleam through for a distinctive ageing effect, unique to each owner. The Dark Hearts ring has an oxidised shank, creating again the marked contrast with the highly-polished silver heart. (Pieces from this range look great teamed up with designs set with a garnet.)

This range is nakedly unsentimental, which is unusual for hearts! It is sinuous and elegant, whilst being quirky and far-removed from the ordinary romantic notions of this common amorous symbol. It denotes something darker and more gothic, but its fluid lines keep it beautiful and appealing to any bold wearer.